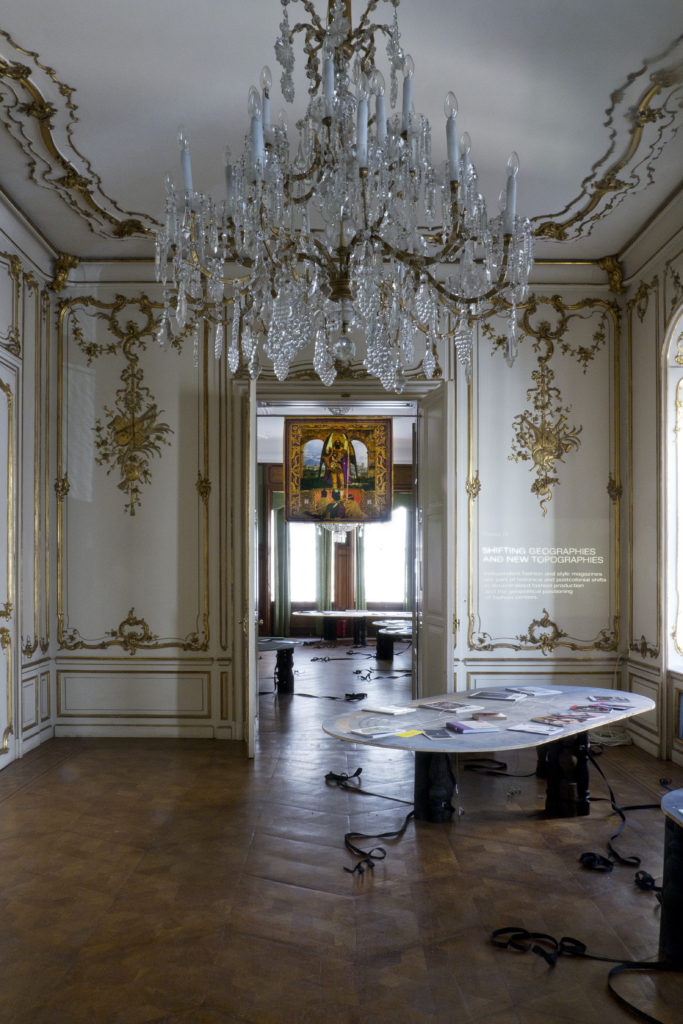 The approximately 50 magazines of the Hidden Fashion Library take a decentralized perspective on the operating system of fashion, be it geographically, soci-economically, aesthetically. With this exhibition, their critical potentials are enhanced in contrasting them with the eclectic interieurs of the staterooms in the Belle Etage of Vienna’s former post administration center, the Alte Post (*), a typical Ringstrassen-environment from early 20th century. The Schönbrunn-style hall and a salon, which appears to be constructed around a flattering portrait of Emperor Franz Josef, have been designed as selfrepresentation of an institution with hegemonic or even colonial conception – the Austrian post then used to be very active in the South-East European and Asian markets. 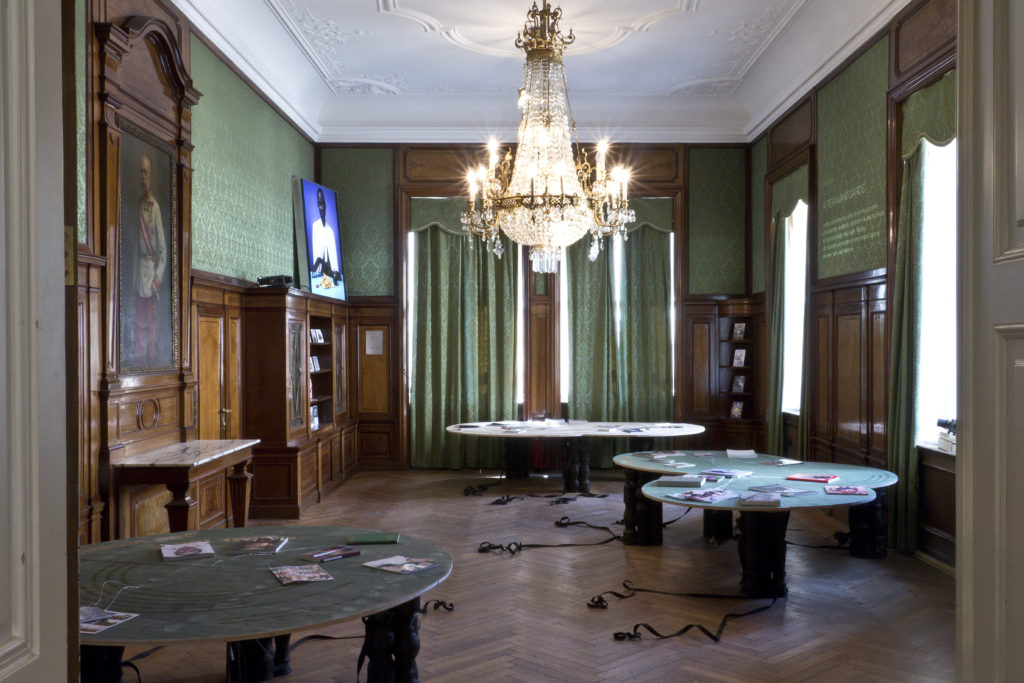 The intervention aims at rendering this beautiful but inhuman surface into accessable and useable spaces, that at the same time profit from the high quality of the décor. The exhibition design of the Hidden Fashion Library remains distant from the present architecture and concentrates on the introduction of functional elements, which play with the lapidary gestus of practical furnishing and with ironic formal references: a set of tables, two panel walls lent against the architeture – all done in roughly painted laminated wood – and slide projections for the exhibition texts. The table plates consist of overlapping circle shapes (diameter 1,5 or 2m), and contain lasercut typography with quotes from relevant theoretical sources. They stand on packs of turned wooden leg billets, which are tied together by over-length tension belts, reaching far out and randomly decorating the floor. The non-standard height of 63cm – a reference to Czech-modernist tabel conception – both allows comfortable sitting and at the same time, while standing, an overview about the exhibited objects. A service with tea marks the library as a space, where the vistiors are invited to settle down and take the neccessary time to  watch / read the exhibited magazines. 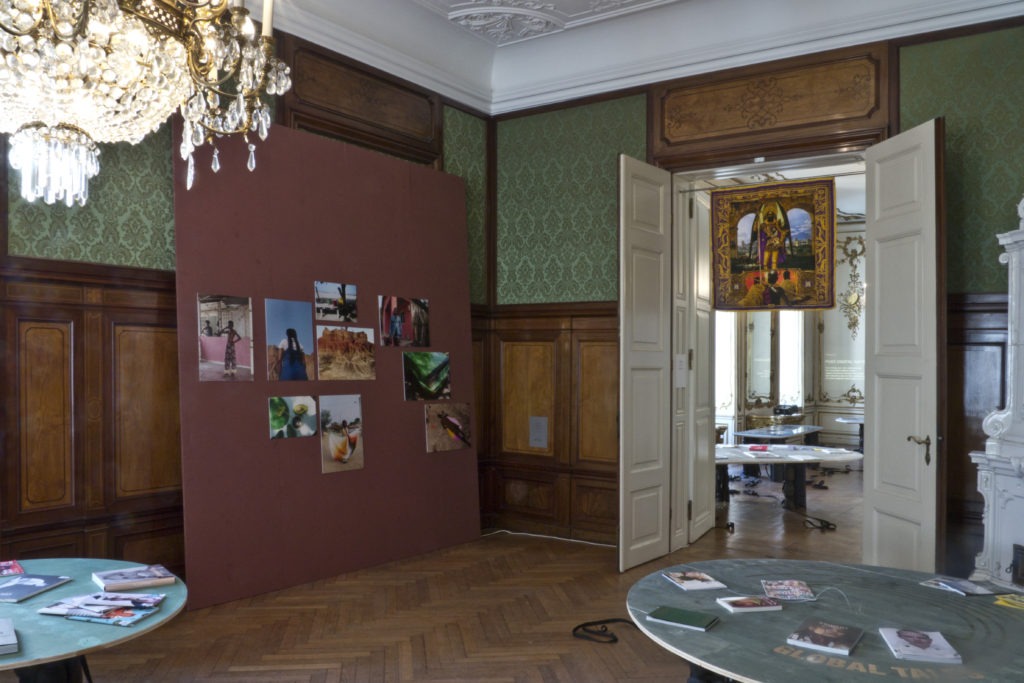 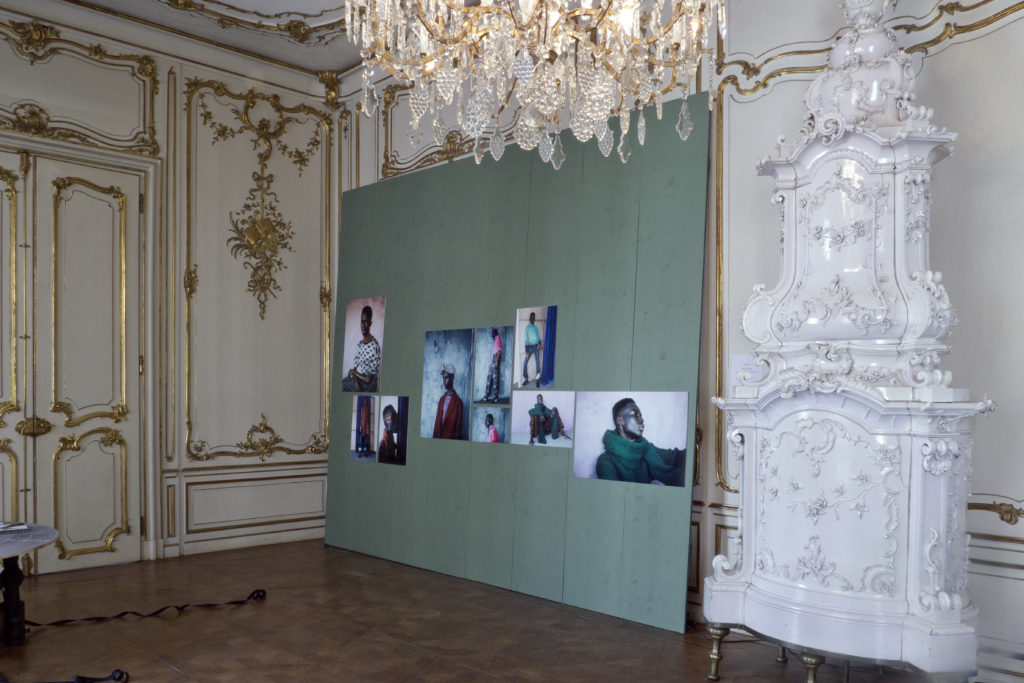 In a direct critical interaction with the above mentioned portrait of Emperor Franz Josef, two contemporary works complete the installation: Sølve Sundsbø’s “Sunrise Market” poses on top of the library cupboard, slightly lent back and turned out of axis just like a souvenir picture on a desk in an enlarged situation; and in the central doorway, visible from all angles of the exhibition, Ikiré Jones’ silk-print from the series “Re-Mastering the Old World” states a strong counterpoint to the decadent manifestation of the declining Austrian monarchy. 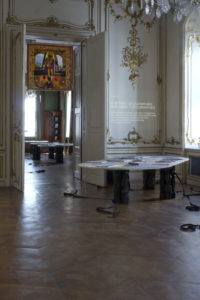 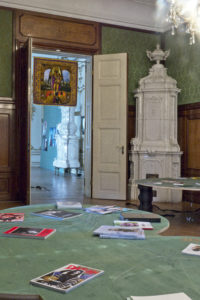 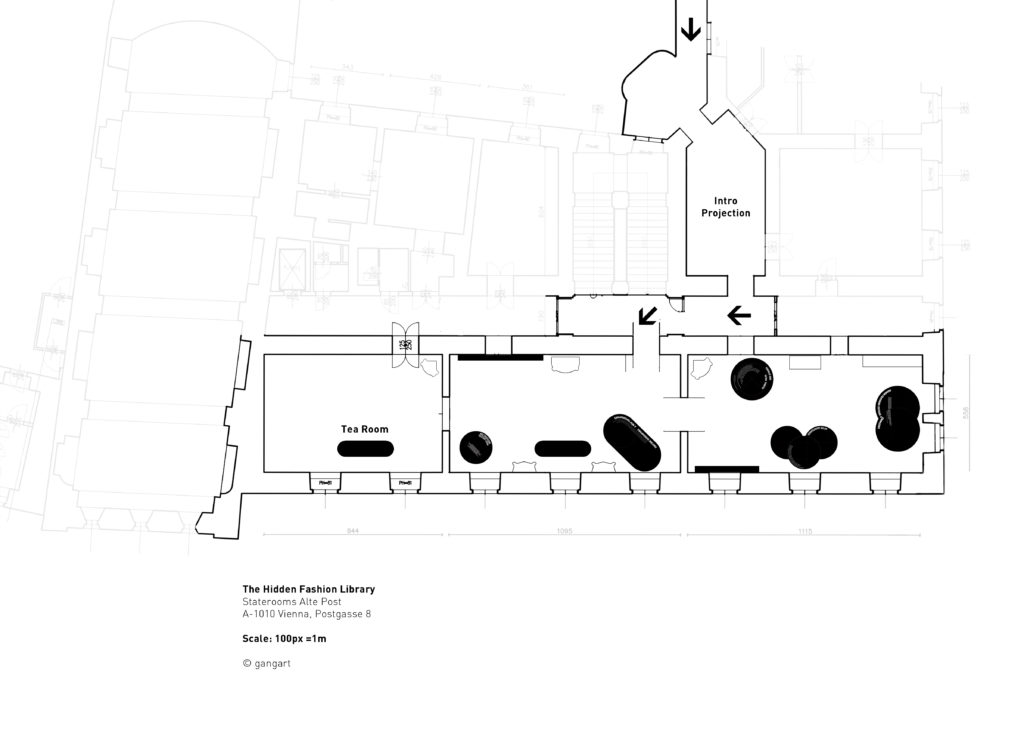 (*)
The building complex of the Alte Post, in five minutes walking distance from St. Stefan’s Dome, is a unification of diverse older single buildings, including eg. the Barbara Church from 1573, which is still in use by the Ukrainian community. It was conceived and executed as the central post administration by town master mason Paul Sprenger between 1849 and 1854, who during the Metternich aera had shaped Vienna’s appearance with several large scale administrational buildings, that are severely dedicated to functional aesthetics. Today the areal is subject to a speculation project for the erection of high standard private propety appartments and gets temporarily used for cultural events such as the Viennale, the Wiener Festwochen, the yearly show of the University of Applied Arts or the Take-Festival.